Phantasy Star was released in the U.S. by Sega in 1988, but I didn’t even hear about the game until 20 years later, which says a very little about the success of this cult classic series. Feeling guilty for having missed out, I’ve decided to take the series on… beginning with the first Phantasy Star for the Sega Master System. 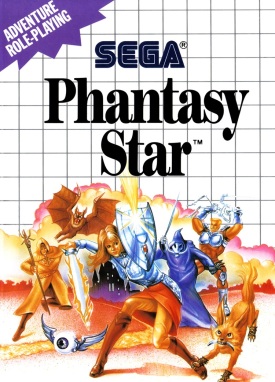 The game immediately begins by setting up the game’s plot: a young man named Nero has been beaten to death, and with his final breath he exhorts his sister, Alis, to seek out a warrior named Odin and kill the tyrant Lassic. What follows is direction-deficient quest to find some weapons and armor so you can fight your way to stronger weapons and armor to aide you in your mission to kill Lassic. Back in 1988, we would have celebrated it as visionary attempt at a story driven game, but this particular story hasn’t aged very well.

The battle system is simplistic and relatively fast-paced, with your party members taking turns trading attacks with enemies. The battles themselves aren’t particularly challenging if you’re strong enough, but the sheer number of battles that you encounter can leave your party clinging to life by a hair before you can make it to a town.

The majority of the game takes place in dungeons that you explore in first person, most of which are a single unlikely color (a cave on an ice planet with crimson floors, walls, and ceilings… really?). The caves are often incredibly complex, making it pretty easy to get lost if you aren’t drawing your own maps. Along the way enemies will appear from the darkness, much as you might expect a real monster to do if you were spelunking on an alien world. At first, the sensation of exploration is exciting, but the uniformity of the dungeons starts to become dull over the course of the game.

All in all, this adventure will probably last for 30 to 40 hours. However, the Phantasy Star Complete Collection has an option to increase (by a little or a lot) the amount of money and experience that you gain from each battle. This can shorten the game to about 10 to 15 hours, which I found to be much more digestible.

In spite of its age, Phantasy Star possesses an old-timey quality that we can appreciate even today. Specifically, I’m referring to how polished the game is compared to its 8-bit RPG contemporaries. I find Phantasy Star to be just as much as much of an old-school, hardcore, grind-fest as Final Fantasy or Dragon Quest. That, of course, means that you already know whether or not you’ll like this game. If you still get nostalgic for those games, there’s no reason that you shouldn’t play Phantasy Star.